Patient empowerment, Big Data, co-creation, connected care, and of course "upscaling." A game of "eHealth bingo" would have been easy to play, according to one visitor to the European eHealth Week in Amsterdam. I attended this massive conference in the field of eHealth as a reporter for FocusCura, but as an avowed knowledge junkie I also enjoyed it on a personal level. In this blog I talk about the highlights, my experiences, and the key messages I took home.

Is it annoying to be constantly confronted with the same old "eHealth bingo" jargon? Not at all, as long as it serves a purpose! eHealth is not a goal in and of itself, but it is a tool for improving patients' quality of life by providing more personalized care at a lower cost.

What stood out most to me was the fact that this year for the first time, patients also participated in the European eHealth convention. No longer were the attendees talking about the patient, they were talking with the patient! Both in the audience and on stage, patients were eagerly participating as "eHealth activists" to inform attendees of the possibilities inherent in innovations that seem fantastical at first glance. "Confined to a wheelchair and living with a rare connective tissue disease, she knows better than anyone how fragile life can be."

One of the most impressive keynote speeches was given by Anne-Miek Vroom- scientist, director of the Dutch foundation IKONE, and patient. Confined to a wheelchair and living with a rare connective tissue disease, she knows better than anyone how fragile life can be. The "Willemientje" award, named after the Wilhelmina children's hospital where she was treated for many years, represents her situation of always looking for balance. And isn't that true of all patients? You can't always control your life - you can get sick, and your health can go up and down,a circumstance over which Willemientje has no control, just like patients. 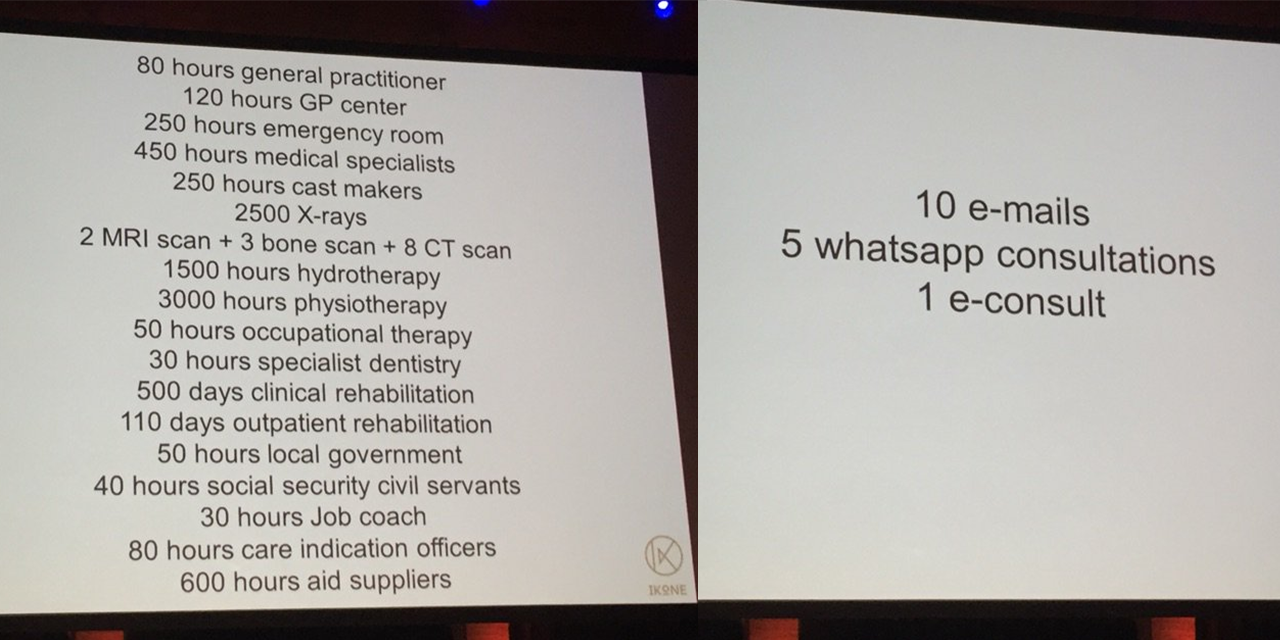 She talked passionately about how eHealth can improve patients' quality of life, with an emphasis on "can," because the 450 hours she's spent with medical specialists, the 2500 x-rays she's gotten, and the 250 hours spent in the emergency room (and this is just the tip of the iceberg) form a drastic contrast with the extent of the distance care she's received (ten e-mails and one e-consultation). And that's not even counting how just being a patient (or a caregiver) eats into your life, by having to spend hours in waiting rooms or getting stuck in traffic yet again on your way to an appointment with the specialist. And think of how much money this costs society!

How can we make sure that all of our brilliant innovations actually play a role in patients' lives?"Having to spend hours in waiting rooms or getting stuck in traffic yet again on your way to an appointment with the specialist."

We have to at least make innovations available to large groups of patients, which is certainly not the norm in this day and age. But things are changing.

Daan Dohmen, the CEO van FocusCura, announced in his keynote speech that patients with heart failure or other cardiovascular issues can receive cVitals and cContact as part of their regular care. This means fewer unnecessary hospital visits, and patients can see for themselves how they are doing and can communicate with the health care professional. 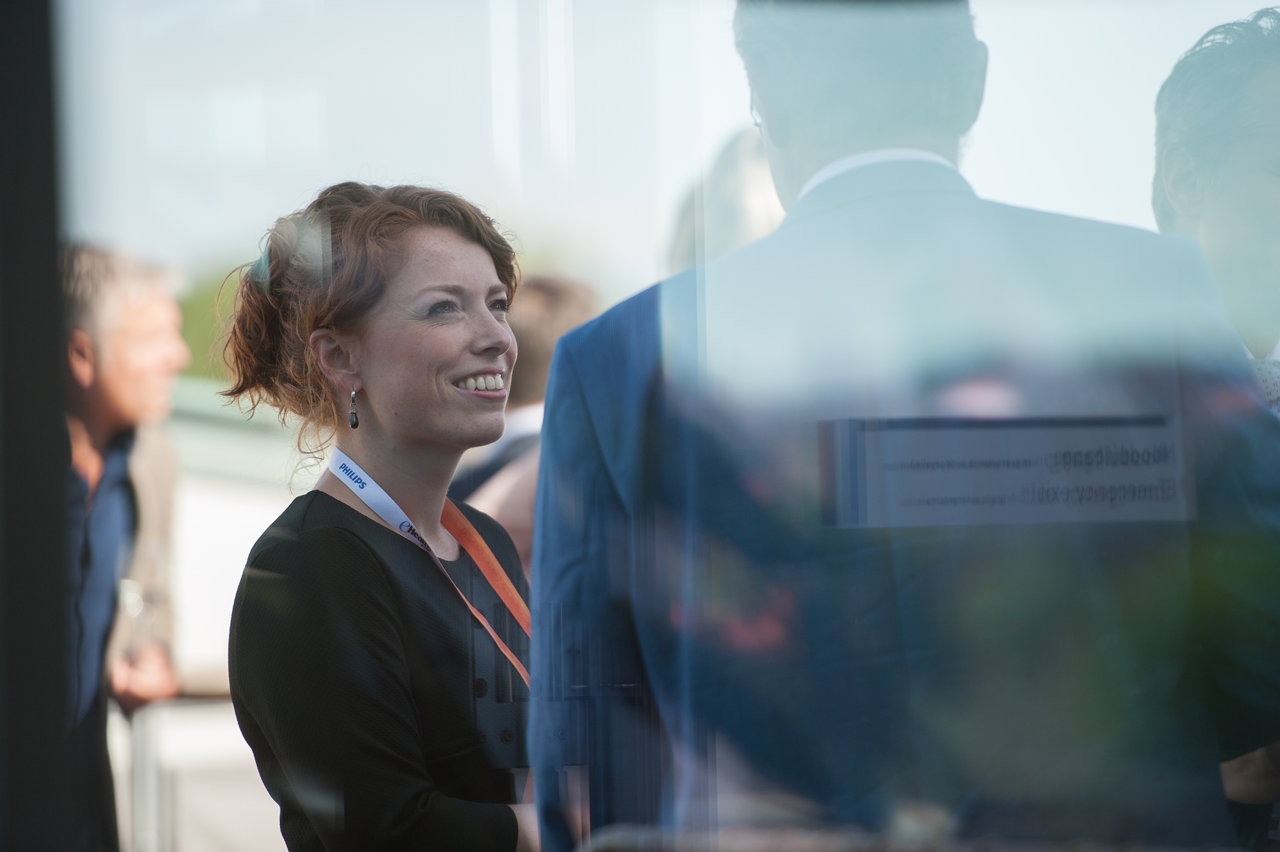 Does this mean that all the hospitals will just disappear?

How will this change the care that hospitals provide in the future? Professor Leonard Witkamp, the director of KSYOS TeleMedical Center, proposed that by 2030 hospitals will be a thing of the past! Will hospitals have been turned into monuments, just like the former stock exchange building the Beurs van Berlage in Amsterdam (where the eHealth convention is being held)? The foundation appears to have been laid.

In any case, hospitals will not be able to continue in the way they are currently organized. Health care will have to focus on the individual patient. Or as Edith Schippers, the Dutch Minister of Health, Welfare and Sport, put it, health care will have to move "from the waiting room to the living room.""Will hospitals be turned into monuments, just like the former stock exchange building the Beurs van Berlage in Amsterdam?"

The number of hospital admissions and readmissions will fall as a result of better prevention using eHealth, as will the number of appointments with outpatient clinics. This in turn will mean that hospitals will be forced to embrace eHealth in order to make sure that insurance companies cover health care procedures in the future. And it will also mean that patients will be released much sooner after an operation.

We still have a lot to learn before eHealth truly becomes a standard part of health care. Using eHealth to change a patient's health care trajectory is not something that will happen on its own, even though this isn't always clear from the outside. Innovation requires a lot of hard work. Or as Professor Wouter van Solinge, the eHealth ambassador from UMC Utrecht, said, "Be like a duck - look composed and unruffled above the surface, but below the surface, paddle like crazy!" 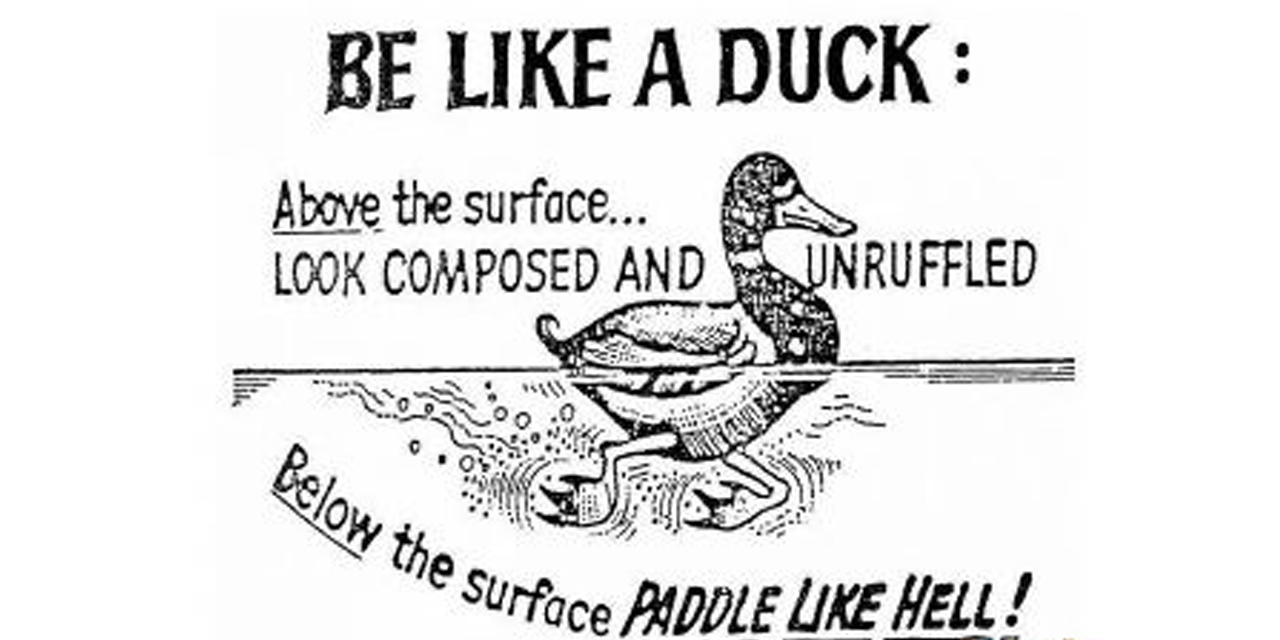 Most of all, I learned where we need to place our priorities in order to make eHealth more successful. And that brings me back to the question from earlier: How can we make sure that innovations actually do play a role in patients' lives?

We can do that by including them as full-fledged partners in the development of innovations. The patients are the only ones who have to deal with their illnesses on a daily basis. And that means that they are the only ones who can explain exactly what will work in the field of eHealth and what won't!